“There is all the difference in the world between having something to say and having to say something.”  (Dewey, 1899, p. 67) 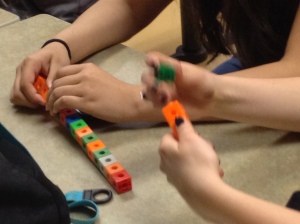 In my earlier days in teachers college, I remember reading and contemplating the words of John Dewey, in particular, his book Experience and Education.  Today I revisited Dewey’s educational and philosophical thoughts, making connections to my own beliefs and practices as a teacher and an educational leader.

Dewey wrote about a revolutionary reformulation of educational theory and practice based upon the core relationship that he believed existed between democratic life and education (Dewey, 1916/2007).    His vision of the school was tied to his larger vision of the good society and he saw education, as a place where children practiced investigations, problem solving and resulted in personal and community growth.  Each classroom represented a microcosm of the human relationships that constituted the larger community and Dewey believed that little school of democracy could create  “more lovely society”.

“Now, keeping in mind these fourfold interests – the interest in conversation, or communication; in inquiry, or finding out things; in making things, or construction; and in artistic expression – we may say they are the natural resources, the uninvested capital, upon the exercise of which depends on the active growth of the child.”  (Dewey, 1899, p. 48)

His description of the fourfold interests of children:  making things (construction), finding out (inquiry),  expressing themselves artistically, and communicating resonates with my belief in a rich experience for my students.  I think about teachers who teach math with too much emphasis on facts, rules and forms without enough emphasis on thinking and attitude of the mind.  The words from Dewey encourage teachers to use inquiry as a teaching strategy where the students are actively involved and the teacher has a role as facilitator and guide.  In my classroom, I strive for reflective thinking, by presentation of a problem, which students can relate to and are within all of the students’ intellectual capability.   Students are active learners in their classroom community.  The learning of children can be great when teachers allow them to pursue their interests, open up their possibilities and create opportunities for self-expression and communication.

Dewey also developed a model of thinking or problem solving which plays a prominent role in the math classroom.  This was described in Noddings’ Philosophy of Education (Noddings, 2012) in her section on Dewey’s Theory of Knowledge.  Thinking begins when children are presented with a problem that is unsettling to them.  They explore and come up with a hypothesis that must be tested.  In each stage of exploration, the thinker/learner is figuring out a plan and considering alternatives.  The plan is carried out and the thinker analyses and makes conclusions.  The learner then reflects on the process and considers other explanations that might work better and how they would use what they have learned, perhaps moving on to a generalization.

Two important points are raised with my re-acquaintance with Dewey.  First – the experience for the student must have meaning for students here and now.  He saw that a severe defect in schools was that lack of engagement- losing interest in the material and confidence in themselves.  In my current work with high school math students – I am constantly reminded of how they have come to think of learning math as a place where they provide the right answers and seek approval from me, as their teacher of those answers.  I’m not sure when this came to be for them, but it always surprises me on how much time it takes for me to “undo” this thinking for so many of my students.  I’m not talking about entertaining students, especially in light of the onslaught of technology and video games that are available to them.   What I see is the importance of providing authentic and relevant tasks and questions which leads to curiosity, genuine learning and meaningful conversations.

The second point is that Dewey believed not only that the learning experience had to be built on or connected to prior experience but that teachers had to think about the continuity in experience – where it may lead to.   Today, we talk about “prior knowledge” and “starting where they are” – but we also want education to be about growth – making me think about teachers who focus on teaching towards the “unit test”.

“Let the child first express his impulse, and then through criticism, question, and suggestion bring him to consciousness of what he has done, and what he needs to do, and the result is quite different.” ( Dewey, 1899, p. 40)

These ideas, along with other philosophers, Pestalozzi and Froebel, were among the first to articulate the process of educating the “whole child” – moving beyond the subject matter and looking to balance of three elements – the hands, heart and head.  These were described in more detail in Noddings’ book (Noddings, 2012).  Thinking and doing were seamlessly connected halves of the learning process and equipped the child with the problem solving skills required to overcome obstacles between a given and desired set of circumstances – and fully equipped for active participation in a democratic society.  It was these philosophical traditions from well over a century ago that broke from pedagogical traditionalists who were practicing outmoded and antidemocratic ideas of drill, discipline and didactic exercises.

But does this sound all too familiar?

Dewey, J. (1899). The school and society; being three lectures. Chicago: The University of Chicago press.

Got something to say? Go for it!